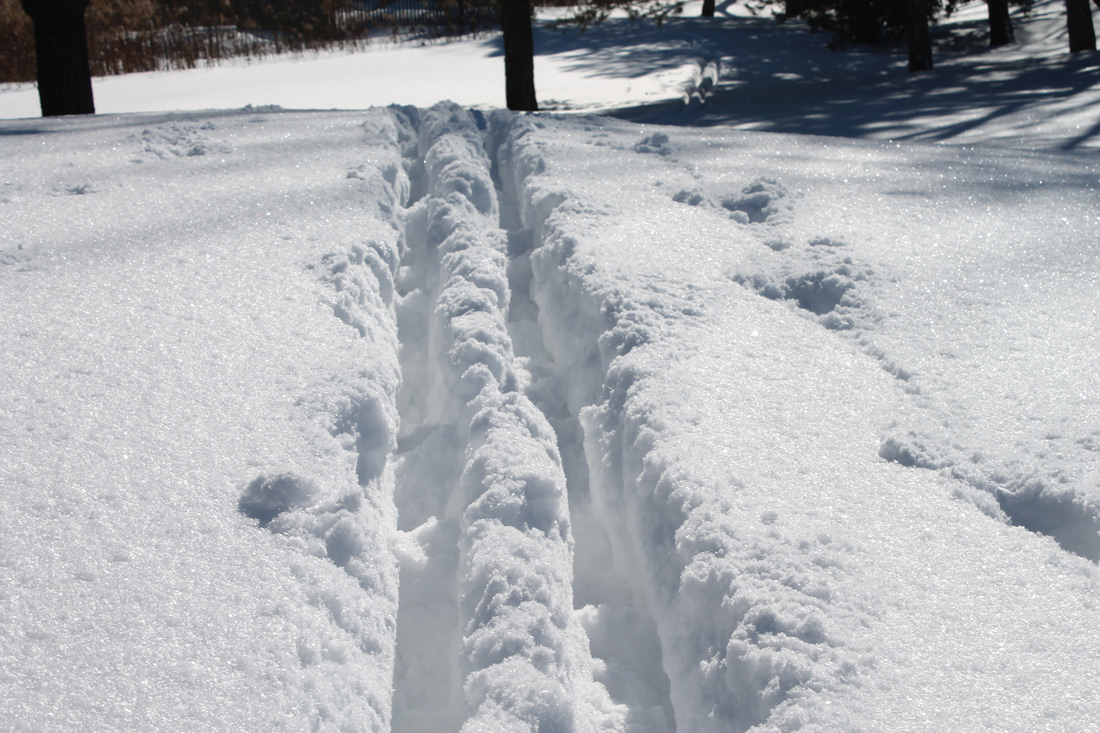 B eyond the rim of snow banks, around the bend where the trail angles into the trees, lies an expanse of white as unexplored as a blank page. No matter that countless sneakered feet and bicycle tires ply this path in every season, on this wintry day all traces of humanity are scoured away by the wind’s husky breath.

My cross-country skis carve the surface deeply, two parallel grooves punctuated by the regular planting of my poles. In a GPS-defined, Google-mapped world, making the first imprints in fresh snow is the closest most of us will get to exploring uncharted territory.

After a green Christmas and a mud-brown January, snow has finally covered Chicago, and I couldn’t be happier. Road treacheries and commuter inconveniences aside, I love snow. It is my heritage, a point of pride that others might feel at the sound of bagpipes or the flags of their forefathers. I grew up in Oswego, N.Y., on the shores of Lake Ontario, where people brag about snow like every storm was a championship game. During the Blizzard of 1966 the town was famously bombed by 103 inches of snow in one continuous four-day fall. I can still remember being a six-year-old and riding on my father’s shoulders through a steep snow canyon in our driveway.

In life, as on a snow day, we make our mark, but only briefly.

Those were the days of three TV channels (four when we could tune in broadcasts from Kingston, Ontario), and outdoors was the only source of recreation. In winter, my two sisters and I would bundle up like members of Shackleton’s Antarctic crew and trudge through the backyard, over the stone wall, across the neighbor’s lot, and into our grandfather’s woods. In the thickest part of the forest, we leaned against the rough trunks of pines and listened to the wind riling up the branches.

Given this legacy, it is impossible for me to ignore fresh snow. And so on a weekday I venture out, despite projects and pressing deadlines, clipping on my skis and heading to the Forest Preserve near my home. Just the day before I cut a trail there but, now fresh snowfall has obliterated all evidence of me. Nature’s erasure is an existential lesson in humility.

The snow-blanked slate accentuates the smallest details that would be invisible in lusher seasons. A field mouse’s delicate etchings encircle the base of a dried wildflower poking through the snow. Bright sun paints a lattice of shadows in nature’s most alluring shades of gray.

Further along, descending toward the river, I see the faint hummocks from yesterday’s ski trek and begin to follow them. So is someone else: The imprints of four paws fill one track. Coming upon a riot of indentations and a few bits of fur, I surmise a coyote has found breakfast. Or maybe an early lunch. I glance toward the trees and imagine a pair of eyes narrowed in my direction.

More than fresh air and exercise or the simple fact that I love to cross-country ski, this is what I’ve hungered for: full immersion in nature with no human in sight, an experience that has become all too rare in my life. No, I am not above tree line on an Alp or in a narrow Himalayan pass; this is suburban Chicago. Yet the experience infuses me with aliveness, and my mind, as clear as the skim of ice on the river, begins to populate with ideas and descriptions. More than I’ve felt for days at my cluttered desk, I want to write.

Shadows shorten as the sun stands tall in the sky—time for me to return home. As I leave the Forest Preserve, completing my loop, I notice my tracks where I set out this morning. In time, these solitary lines will be obliterated by others’ stamp, covered by more snow, or fused by melting. In life, as on a snow day, we make our mark, but only briefly. Like painting with water on absorbent paper, it is a transient, but precious, moment.