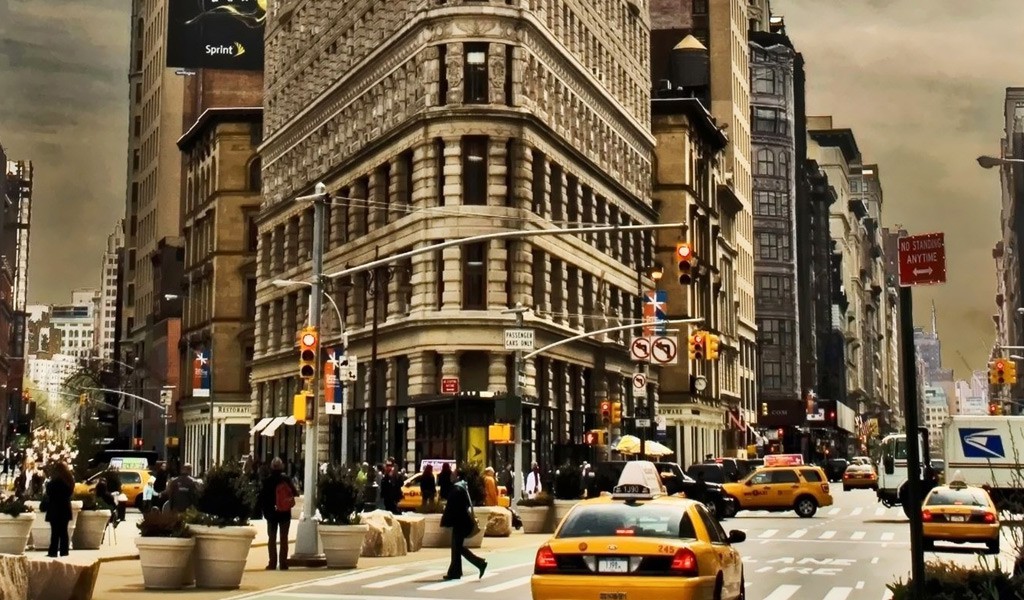 In my search for existential truth, I would have settled for some directions.

T raffic zoomed in both directions on Seventh Avenue, taxis weaving in and out like mad hornets and trucks and cars vying to defy the laws of physics about occupying the same space at the same time. Wearing my one good suit—black, with a lavender blouse—I had been spit out of Penn Station with a clot of other commuters after I had spent the night at a friend’s parent’s house on the Jersey Shore. Other than a drive-through a few years earlier, during a flight layover when my mother and I were traveling to Europe, I had never been to New York City before, even though I grew up about 200 miles north of there. But I was from an entirely different part of New York State: a North Country girl from the shores of Lake Ontario. My first job away from home had taken me even farther north to the Tug Hill Plateau and the edge of the Adirondack Mountains.

Here I was, at the age of 24, in a far different territory: concrete and pavement, brick and glass and metal—a Monopoly board of commerce and purpose on every square. No one looked left or right, up or down. They marched straight ahead to the beat of the city while the noise only jangled my ears. Unlike the crowds of people who knew where they were going, I was a little lost and afraid of getting more so. I had no mental picture of where I was, even though I had been told Manhattan was mostly a grid with numbered streets. Penn Station was at Seventh Avenue; all I had to do was go a few blocks to Fifth Avenue, and then up to 34th Street. As simple as rolling the dice and advancing my game token the right number of spaces. But I was lost in a bigger way, one I didn’t want to admit to myself, especially not outside Penn Station carrying my hard-sided Samsonite suitcase (strawberry pink—of course). I didn’t really know why I was going to New York; it had never been my dream to work in the Big Apple. If anyone had asked me, I would have pictured my future on a picket-fenced farm in the Adirondacks, growing lilacs and sunflowers, with the adorable children I’d have one day gathering daisies from the field. But after an abusive relationship from which I had escaped (literally) I didn’t believe in that whimsical greeting card world.

By pure coincidence that felt like a wink and a shove from two Big Hands, I had received a call one snowy Thursday night in the apartment I shared after fleeing the horrors of he-who-shall-not-be-named. On the phone was a woman who owned a small public relations agency in New York City. The woman on the phone said she, too, was from northern New York State and had heard about me from a former college friend, whom I knew professionally. She liked to hire young people from the North Country because we worked hard and appreciated being given an opportunity in the big city. That was code for working too many hours for too little pay, but I didn’t care. Even though I was away from “him,” I didn’t want to stay in the North Country, feeling scarred and scared and completely humiliated that my big white dress with the ruffles and the reception at the steakhouse outside of town had shackled me to a man who abused me (a brief alleged marriage—measured only in weeks—later annulled). Knowing I needed a fresh start but having no idea where or how to find one, I recognized an open door when I saw it.

First, though, I had to find the threshold—specifically, the Empire State Building, 350 Fifth Ave. From where I stood at Penn Station, I had no idea if my destination lay ahead or behind me, although with a calmer mind I could have figured it out. But my brain rattled with the questions—where am I and where am I going? In my search for existential truth, I would have settled for some directions. I looked around, but no one met my gaze kindly. My father, certain that I’d be kidnapped and left for dead the minute my foot hit the pavement in New York, had made me swear a blood oath never to speak to a stranger on the street. I looked for a police officer; instead I found another man in uniform—a mail carrier. “Excuse me? Which way is the Empire State Building.”

He smirked like I was a Candid Camera setup. “Lady, look up!”

Once I raised my eyes from the grimy pavement I could see the unmistakable skyscraper that pierced the heart of Midtown. All I had to do was keep my eye on it until I reached the revolving doors of what I had never thought of before as an actual office building where ordinary people went to work. (I’m not sure what I thought the Empire State Building was—a monument? A model for a paperweight?) If I got this job at the PR firm, I could become one of the people who were stomping past me. New York City may not have been the Promised Land I had envisioned all my life, but it was the only destination I had.

The Israelites on the march out of Egypt suddenly found themselves sandwiched between the Pharaoh’s army and the Red Sea. Then Moses held out his staff and the Red Sea parted. There was no mistaking the escape route: Backwards was not an option; left and right were a wall of water (literally, metaphorically—take your interpretive pick). Only one way to go.

Outside Penn Station, a rock blocking the stream of people who angled their shoulders and briefcases around me like fish flipping their tails to navigate underwater debris, I feared drowning in the waves of movement. Yet I couldn’t stay anchored in place, and so I started walking, looking up to keep my eye trained on the building spire that pointed the way to go.

Over the next few weeks and months, I learned to navigate the city, made friends, figured out the subway; a couple of years later, I moved from New Jersey to a tiny apartment in a dump of a building on the Upper East Side—great address, lousy living quarters. That hovel didn’t have a doorman (there wasn’t a superintendent for a while, either, because the owner had let the building slide into bankruptcy, and I paid rent to the court). But the posh building next door had a 24-hour attendant, and I felt the aura of implied safety.

I changed apartments and jobs, met a boyfriend or two, and eventually made my way to Chicago and married life and a family.

Looking back, I see that everything I’ve become since then was the result of that one decision, to uproot from the familiar and plant myself in the hard ground of New York City. It was a tough time during the second half of the 1980s and the early 1990s, when Times Square was seedy and a little scary, not the Disney-esque place it’s become. New York was working on its comeback then, and so was I.

For me it all began when I took my first step out of Penn Station. It was one of those declarative moments that divide life into what came before and what came after. Then again, there was no decision to make at all. When the waters of my fear and indecision parted, there was really only one way to go.