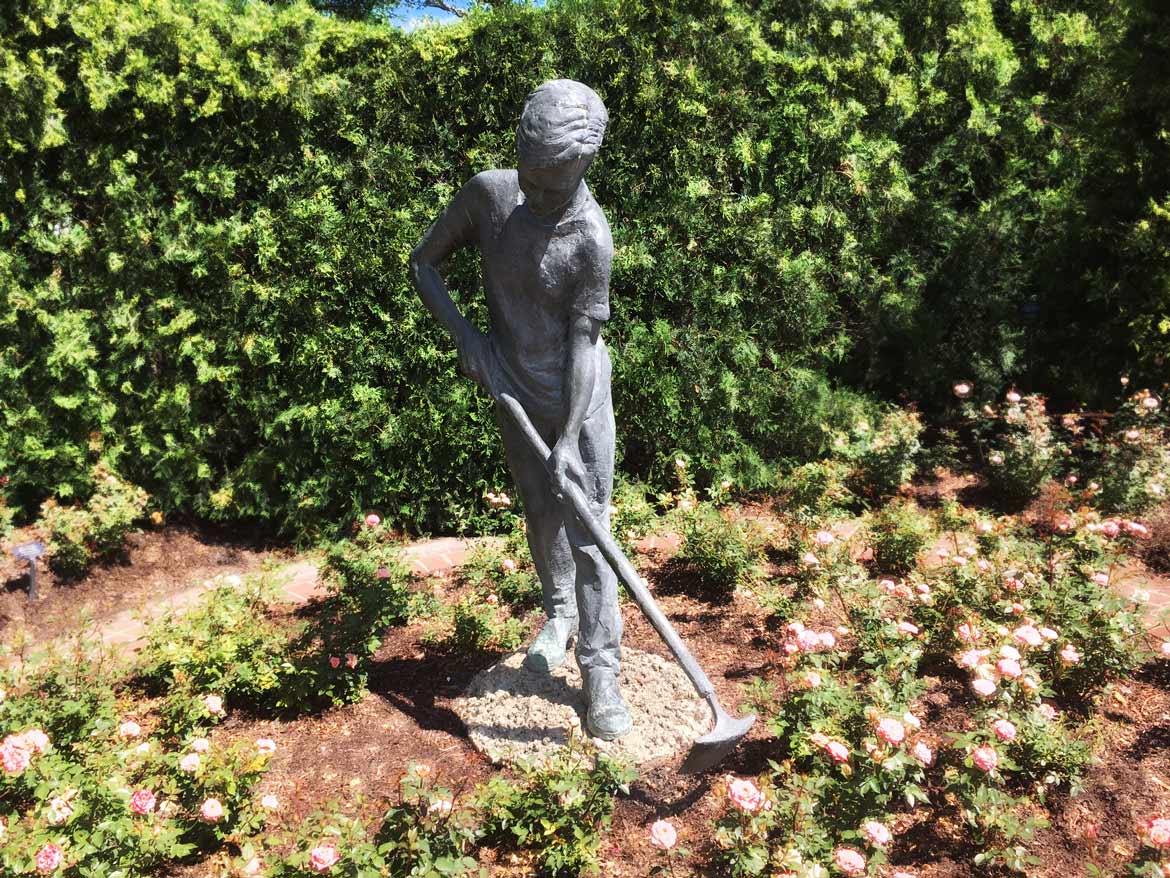 Of Gardening and Memory


The sun struggled to peek through the stratus clouds. Intermittent showers, a mix of cold rain and sleet, appeared at the most inopportune times. The snow cover, which remained from last week’s blizzard, melted steadily as patches of land appeared like islands in a sea of snow. The cold, clinging air added to the rawness.

In the days just before the last frost-filled nights end for the season, a gardener’s thoughts are filled with both anticipation and courage: How much longer before I sow the peas and other hardy vegetable seeds? Are the frosty nights finally behind us? Would row covers keep the ground warm enough? I’ve been asking such questions for the last twenty years.

On Monday, March 27, my answers would have to wait for another day. I was grieving for my aunt—my godmother. On this day my cousins and I carried the casket to her final resting place, back to the soil. While her death was unexpected, Aunt C. was 82 and had struggled with mobility for the last half of her life.

After we learned of her death, we gathered—my sister, two of her grown children, and my wife—at my aunt’s home, which she shared with her sister, Aunt E. We were there to console her, the survivor, who is 86 and increasingly frail. I was tasked with gathering a few anecdotes and rudimentary information for the priest who would preside over the funeral.

Isn’t this how we honor the dead? Privately we pray, but publicly we tell stories to keep them alive, as if to remind ourselves the departed once existed. We offer stories to seal them in our memories, so when the sound of their voices, the feel of their touch, or the ten thousand acts of love and grace they showed the world melt like snow, they will be remembered with a smile and a pang of loss.

We spent most of the evening reminiscing: how my aunt liked flowers and constantly reminded her sister to water them; how she traveled whenever she had the chance back when she was mobile; and how she loved photos, taking pictures to document her trips and later, viewing the lives that orbited her stationary life.

As a child I was enthralled with the large backyard garden Aunt C. and Aunt E. cultivated. I marveled at cucumbers growing from yellow flowers; tomatoes reddening on the vine, and crook neck squash stretching beneath the shady cover of large leaves. It was mystifying. My aunts’ commitment to gardening wasn’t about fresh food, heirloom seeds, or sustainability. It was about stretching a dollar with sweat equity and about the heritage they brought from Maine. Most of all, the garden meant food security.

My aunt seized on my interest and asked if I would like to have a garden. I received the OK from my parents to plant one in our backyard. My aunt and I made plans.

Later in the week, she appeared with a child’s size spade and a lunch bag folded in half. Together we roped a small square, no more than three feet by three feet. We took turns cutting the sod and overturning the soil. We broke thick clods of clay, and I watched in amazement as the earthworms squirmed for cover and wove in and out of the upturned soil. My aunt dangled one in front of me and explained their importance. She was so brave!

Once the garden bed was smoothed, it was ready for the small brown bulbs. We lined the scallions in a row, spacing them a few inches apart. We pushed the bulbs just below the surface and covered them with an ample amount of soil. My aunt told me to water the plot—but not too much or too little. My hands and jeans were dirty, and like most little boys, I was happy, taking delight in making a mess.

There was nothing left to do but wait and water, water and wait.

When you’re seven years old, days are like years. I can’t recall if I checked the garden plot daily, or shifted my attention to the baseball season, or any number of things that can occupy a child’s mind. I may have given up altogether.

One morning, as though orchestrated by all the scallions underground, green blades, like fingers giving small peace signs, poked through the soil. It was a miracle—and I was hooked.

What took root in that garden long ago is now part of the landscape of my memory. What my aunt taught me is repeated like a ritual. All of the work and waiting until harvest are the compost and bloom for memory, for story, for faith. The first blades of promise will reach towards the spring light.

Tom Lagasse lives in Bristol, CT and works at The Hickory Stick Bookshop in Washington Depot, CT. His writing has appeared in The Feminine Collective, The Artful Mind, The Sun, and Catholic Digest. An upcoming article will be published by Edible Nutmeg in July. In January 2017, Tom was interviewed by Tracy Mumford for Minnesota Public Radio’s segment “Ask A Bookseller.”