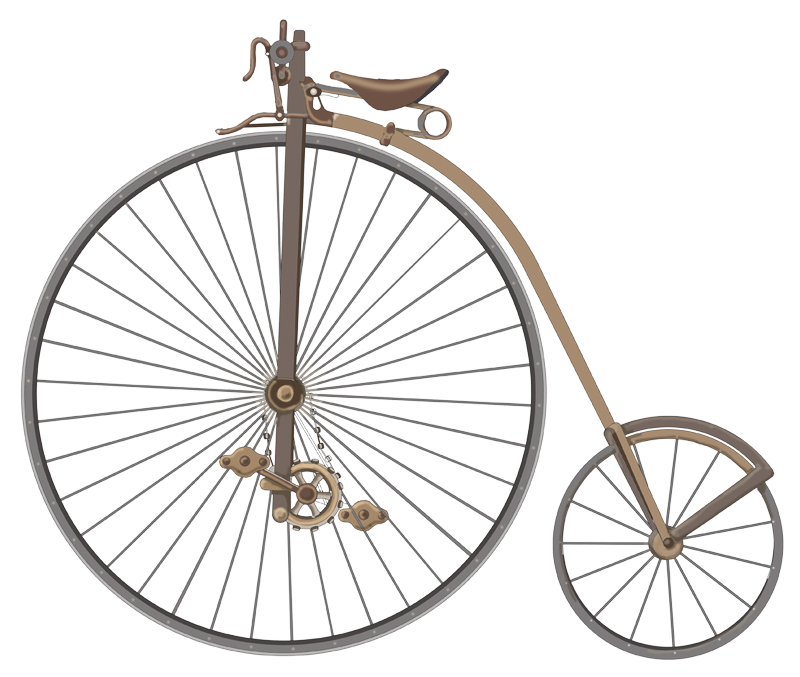 Pre-Elvis Chicago—the original, Presley, not Costello. Slightly post-World War II, when Eisenhower in the White House was a vivid memory rather than a newsreel. And a little kid on the far South Side was trying to learn to ride his bicycle.

Summertime, late in the day. Dinner was over, but there were two hours or so of daylight left. Residential air conditioning was rare for the middle class, so most people came outside to sit the stoop and catch a breeze. My parents sat on our stoop, side-by-side on the top landing. As a little kid, I knew my parents talked. But I never got to see or hear them do it very much. Besides, I was preoccupied with a huge undertaking: learning to ride my two-wheeler.

A couple of weeks earlier, Dad had taken my training wheels off at my request. I could tell he hadn’t like doing it. I got the impression that he knew it had to be done sooner or later, hopefully much later. Since then, I had been fooling around with my 20-inch red Schwinn standard bicycle with coaster brakes, but it wasn’t going well. I had a few scrapes and bruises to show for my failed attempts. (Much later in life, I would discover that these battle wounds were known as pavement rash, and riders with severe cases were referred to as sausage creatures. A famous biker Isle of Man racing song describes “…I broke me bones and skinned me hide…”  I was to do both in my two-wheeled career, on bicycles and motorcycles. But that’s getting ahead of this story.)

Crashing on lawns, I had discovered, was much better than crashing on the cement.

On that summer evening, I was determined to master riding, fueled by two things. First, the kids on my block could ride and I was desperate not to be left behind. And, second, it looked like so much fun—the very coolness of traveling at speed with seemingly little effort. I could outrun any kid on the block including the big kids, but I couldn’t outrun a bicycle.

After lining up my bicycle in the middle of the empty sidewalk, getting the pedals just right for starting momentum, I pushed off. I managed a few pedal rotations before veering off onto the grass. Crashing on lawns, I had discovered, was much better than crashing on the cement. But I also learned that putting a foot down to save myself from a crash didn’t help me in learning how to ride; it could become a very tough habit to break. (Much later, I would think rhapsodically that tis nobler in the mind to crash, hoping to learn how to ride, than to avoid the slings and arrows by putting my foot down.)

I was convinced that all I had to do was master getting started and go mostly straight. Turning and braking would be easy to learn after that.

There is no record of how fire was discovered, when the first horse was ridden, or who invented the wheel. Yet, everyone who learns to ride a bicycle recreates how the wheel operates. Learning to ride a bicycle is nearly a necessity in modern times—ranks right up there with learning to swim, or at least learning to drown in the slowest possible manner. Jumping off the high board is its own reward. If juggling were as useful as, say, tying your own shoes, everybody would be capable of that trick. Then again, we now have Velcro and tying shoe laces could become a lost art except among those who know the difference between a square knot and a “granny.”

When my kids were little and trying to learn to ride a bicycle, I had nothing for them as a parent in the how-to-ride department. I could ride but had no idea how to impart the skill to another person. Merely setting an example wasn’t sufficient. At the time, I was teaching motorcycle riding classes and being able to ride a bicycle was the only pre-requisite. Once I watched a really smart motorcycle riding instructor try to teach a non-bicycle riding student how to ride a motorcycle for a total of 12 hours—and fail completely. We talked about that a lot. The student was willing, as was the teacher. But there was no collective knowledge of how to teach a person to ride a two-wheeler other than to encourage the experiment.

Bicycle Magazine, for the sake of documenting the experience, decided to teach a 30-year-old how to ride a bicycle. The magazine delved into the archives of bicycle literature and could find nothing aimed at the problem. After success with turning that 30-year-old into a rider, even the student couldn’t say how he acquired the skill.

Any parent who has ever steadied a kid on a bicycle while running alongside understands the inadequacy of this approach. When I did the same thing, I thought there must be a better way. Alas, I had no idea about it and preferred that my kids learn in the time-honored way—on their own, with encouragement and some oversight from me. Out of my three kids, only one’s victory moment of “getting it” was ever witnessed by me. But I still couldn’t tell you how she did it.

My own parents were of no help as I struggled to learn, other than watching and keeping quiet. I was thankful for their lack of interference and confusing words. I never bothered to ask them for insight. Maybe it was because I had never seen them ride a bicycle. Only much later, would I suspect that neither knew how.

On that summer evening, all I feared was becoming one of those kids who would never learn how to ride. Then I would be left behind. Forever.

I kept at it. The bike managed to go mostly straight for long enough and stayed upright through a couple of wobbles. I slammed on the brake and got a foot down before I crashed at my newer and higher speed. I reset in the middle of the sidewalk and launched myself once more with just a smidgen more confidence. I rode a bit further. Several more stops and restarts later, I was riding further and further each time.

Then came the miracle moment: I didn’t have to stop.

I still have no idea how I finally managed to get it: stopping and starting at will; riding to the end of the block and stopping to turn the bike around. I didn’t worry about how to make a U-turn or any other kind of turn. I would figure all that out in time. I just wanted to revel in riding back and forth on the sidewalk from the corner to about halfway down the block.

Picking up speed, feeling the rush of wind through my clothes and over my bare forearms, made the glory of the moment intoxicating. After six or seven passes in front of our stoop, I risked a yell to my parents. “I am doing it!”

I snuck a quick glance to see if they were as joyous as I was. But they weren’t smiling. They looked frozen in place, mouths slightly agape. They had a deep look of concern bordering on fear. Whatever was wrong with them, I didn’t want to know and decided to enjoy my first new superpower. I picked up speed. Yahoooo!

After some more sidewalk strafing past my parents, I began to tire and breathe heavily. Dad called to me: slow down a bit, take a break, be more careful. I am sure that Icarus heard the same caring concern from his father as he flew higher and higher toward the sun. I knew exactly why Icarus paid no heed. I was no longer limited by my 20-inch strides and now had a veritable magic carpet ride.

Those of us who prefer two-wheel velocipedes view cars as cages and those in them as “cagers.” And no matter how gilded the cage, it is still a cage to us. Granted, we two-wheelers are sometimes forced into the cage. But we know where we are and why it is not optimal. Sometimes we are driving cross-country on the Slab and find ourselves looking at the ditch and wishing more than anything else that we were riding our bikes along the single track at the varmint fence line.

The cagers are too timid if not outright scared to death of falling off a two-wheeler. For us bikers, the reward of such motion far outweighs the risk of falling. It is the difference between ballroom dancing and pairs ice skating. Very few cagers are so interested in developing any real skill behind the wheel as to make driving really rewarding.

Years later, my dad, trying to understand my constant desire to be on two wheels consoled himself with the phrase, “Some people like to ride in the wagon and some like to be on the horse.”

Left to my own devises, I would not have a home. I would have something like a “base camp,” a place I didn’t ever have to return to. My wife, Maureen, has given me a home. Home is the place I want to return to, assuming I can get away in the first place.

Life, as I see it, is to be lived in motion.