I Wonder How the Bear Felt 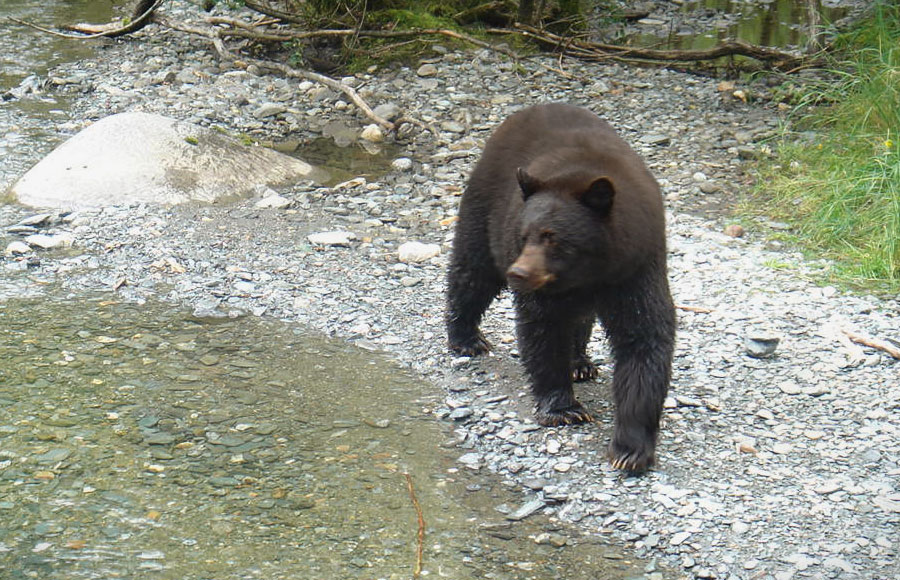 This bear, his former animal-child, would have to learn.

F or many years my father, my brother Curt, and I traveled to the northern lake country—from Wisconsin, through Minnesota, to Canada. It was our tradition, the ritual of fishing together, which had started early in my childhood and lasted until my dad passed away. Curt and I continued the tradition, returning to the waters near where our father was born and raised, and then venturing even farther north where the human population was sparse, but fish were plentiful.

On every trip, the beauty and seclusion appealed to us as much as the fishing and shore lunches, freeing us from the constant pressure of busy, demanding lives. Amid pristine lakes, deep forests, and unpolluted air we kept company with the geese, ducks, foxes, deer, moose, and birds of all sort. We were there, with creation—with God.

One summer, while I was still in college, Dad, Curt, and I stayed at a camp in Ontario, Canada–Clarke’s by name–about a three-hour drive north of the U.S.-Canadian border. It was upscale from the more rugged camps we used to frequent, with fairly comfortable cabins and a cook on premise. Other than sleeping, early morning breakfasts, and dinner in the evening at the camp, we were out on the lakes fishing. At mid-day, we’d build a campfire on the shoreline and cook the fish we’d just caught for lunch.

From Beaver Lake, where Clarke’s was located, we portaged to several other waters by means of narrow creeks or short separations of dry land. There were no roads to these secluded lakes, and little in the way of facilities for more than a day or so of habitation.

This particular summer, I was turning 24 years old, and had just finished my first year of dental school, following four years of college and service in the Navy during World War II. As a pointer on a 40-millimeter gun turret on a destroyer, I had spent many days looking out over the ocean and praying that one day I’d be back “up north” and fishing again. To be at Clarke’s again was a blessing and one of the most enjoyable experiences of my young life.

We spent our days on lakes surrounded by pine and birch trees. Leaves and pine needles carpeted the ground. All around were forests and fields with no other humans for many miles. Geese and ducks flew overhead or bobbed on the water. Eagles wheeled across the sky or perched on tree limbs. The loons’ songs interrupted the silence of the evening and early mornings, a soothing sound like no other. Coves and inlets carved the shoreline that was covered in places by lily pads. Everywhere were rocks and trees–some standing tall and others fallen back to the earth. Deer, moose, and foxes frequented the lake, and once in a while a bear would be spotted in the distance.

Early each morning, we set off in a fishing boat that seated a maximum of four and was propelled by an outboard motor and a set of oars. We headed to a certain place along the shore or the reefs where we’d had good luck with fish before. There we cast our artificial bait–some small, some large with different designs and colors–while one of us slowly rowed. When not using the oars I usually sat in the bow, with Curt in the middle and Dad in the seat by the motor because he decided where we would fish.

Walleyed pike were the usual shore lunch for most Canadian fisherman, so we set our bait in the morning according to our appetite. After lunch, we’d change both fishing location and the type of bait we used, trying for bass, northern pike, and a big muskie now and then. Around suppertime we’d head back to camp for cocktails, dinner, and good conversation.

Clarke’s Camp had five or so comfortable cabins, each equipped with woodstoves for heat and running water for bathroom purposes, which was certainly a welcome convenience compared to the old outhouse days. Our cabin this particular year was within a hundred or so feet of the “lounge,” a common area where we ate and visited with other fishing buddies and those who owned and operated the facility.

The camp cook was Asian, and he spoke broken English with an accent that recalled being born and raised in a foreign land, far away. Seeing him in the cook tent–serving up breakfasts of bacon and eggs, oatmeal or pancakes, and fixing meat-and-potatoes dinners–I used to wonder about him. What had brought him here, to Clarke’s? Did he have a family somewhere, or was he on his own? Every time I saw the cook, he was working by himself.

Early one morning before breakfast, loud clamoring noises shattered the quiet activity of the camp. A man yelled and screamed. Pans clashed. A door slammed. I couldn’t understand a word the man was saying, but I recognized the voice as the cook’s. Whatever he was yelling it sounded threatening.

Running out of the cabin, I saw the cook storm into the kitchen and then heard the rapid fire beat of a serving spoon against a pot. The cook’s angry tirade was answered by strange grunts, stronger and very distinct. Several times, pieces of the window flew out of the frame.

I stood there for several minutes, wondering what was going on, when the kitchen door flew open again. Out came a big grunting black bear with the cook closely behind, yelling and banging on a pot. The bear stopped within twenty feet or so of the crippled kitchen door, holding what looked like a slab of bacon in his mouth, staring at the cook. The animal didn’t look menacing, just confused by all the commotion. Eventually, it strolled off into the forest, glancing over its shoulder now and then, almost like saying “goodbye.”

Mr. Clarke came on the run, attempting to calm down the cook. I didn’t hear much of their exchange, but from my vantage point it seemed the cook was disgusted and frustrated by what had happened. As I approached the cook and Mr. Clarke, I learned the details: The cook was the bear’s surrogate parent, having raised the animal from the time it was cub that wandered into the camp, apparently having lost its mother. After a year or so the bear, which was a male, grew to a mature size. The cook released him to the wild, hoping the animal would live a normal bear’s life. To me, though, such a premise seemed questionable. The bear clearly had a mind of its own.

The cook wasn’t frightened by this encounter. He was clearly agitated at the bear whose name (which I have forgotten) he kept repeating. The cook expected the bear to show him respect and abide by his rules and those of the camp. I could imagine him thinking that all those father-son “talks” should have instilled lessons into this big creature. How was it possible that this once-tame animal ignored the expectations of behavior that were preached to him in his younger days?

The cook showed no warmth concerning the reappearance of his tame-wild youngster. Rather, he was angry at the destruction the bear had caused and the additional work that it created for him. His directions and commands were to be listened to and respected. This bear, his former animal-child, would have to learn. Appropriate steps would be taken to prevent such a scene from ever happening again. The bear had to learn.

So the cook was mad, Mr. Clarke was apologetic to the guests, and I soon heard my father call to me and Curt, urging us to get ready for another day of fishing.

I wonder how the bear felt.

Rev. David Grauer is an ordained deacon of St. Mary’s Episcopal Church in Park Ridge, Illinois, and has practiced dentistry for more than 50 years.