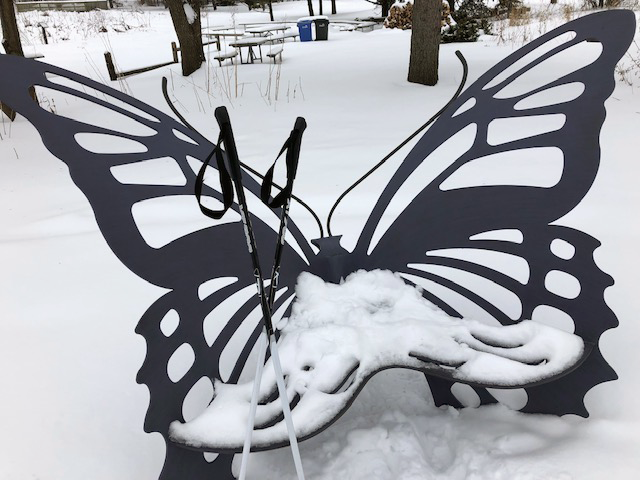 My skis cut a path, the first track through a hardened crust, and I entered a monochromatic world. My plum-colored ski jacket flashed the only color; my movement animated a lifeless world. Feathered or furred, the wildlife burrowed and hid, out of sight and beyond the reach of the swirling wind.

Meteorologists warned that far worse would soon arrive: the descent of an Arctic Vortex and the potential for record-breaking cold that would send temperatures down to -27 on the coldest nights, with windchills dropping to -50. Schools closing were announced preemptively. People left offices with plans to work from home. Get ready, fill up, cover up, stay inside…

But not on this day, when the combination of snow and relatively moderate temperatures were not to be squandered. I had an hour, maybe an hour and twenty minutes, a timeframe too constricted for a drive to my favorite cross-country ski trails. All I could manage was the park three blocks from my house, with laps around the perimeter. Hardly seemed worth the bother, I grumbled as I put on my gear and set the skis outside the back door.

The state of being one place and longing for another is sure to invite disappointment. You wanted to go to Paris but could only afford Montreal. You wanted to stay on the beach but settled for the place across the street. First-class problems, I always scold myself when I have such thoughts, condemning them as completely inappropriate to contemplate with all the despair and disparity in the world. But discomfort is one of those tricky teachers, pointing me more deeply into my own feelings. The question invariably becomes “why?”—the choice of one option over another, one path versus another.

And so my short ski outing taught me what I was missing that day, but far more important, what I had managed to capture. What I was missing was obvious from the first quarter-mile loop around the park—a hamster on skis, scampering in a circle, instead of enjoying long, rolling hills with challenging rises and twists. Then “why” took me more deeply into my choice, which really wasn’t one place over another. The only choice that day was ski or no ski. And I—gloriously, triumphantly and on a workday with pressing deadlines—had chosen to ski! Score a victory for the workaholic who considers productivity to be the ultimate virtue.

That revelation picked up my pace and my mood on the second loop, as I followed my own tracks hardened by the friction of skis on snow and the flash freezing of ice crystals. Here was freedom, movement, and my favorite winter sport. I’d had a choice—and took it.

At that moment, with muscles warm and mind clear, I took in my familiar surroundings made so alien by winter’s stark contrasts. Snow blanketed the picnic pavilion. Drifts buried gardens. Trees waved scraggly branches in the wind. Ice skimmed the pond where ducks usually cruised the surface.

I could picture summer’s images: the yellow-green of the giant weeping willow, the golden of the field flowers, the sand-and-gravel crunch of the path around the pond. In a few months, the bluebells would blossom by the fence. The goldfinches would shed brown feathers for yellow. Children chase each other around the path, and fishing enthusiasts would catch-and-release around the pond. It was all here, in distant echoes and dormant seeds. Sun and time would bring it back to life. But for now, it was frozen—in time and space. Those choices existed, but their timing was not yet ripe.

I came to my last lap. I’d stretched my outing to the last minute, gleeful from the stolen adventure. I had said yes to the only choice presented to me. The deeper desire, unfulfillable in that moment, was only waiting for another day.