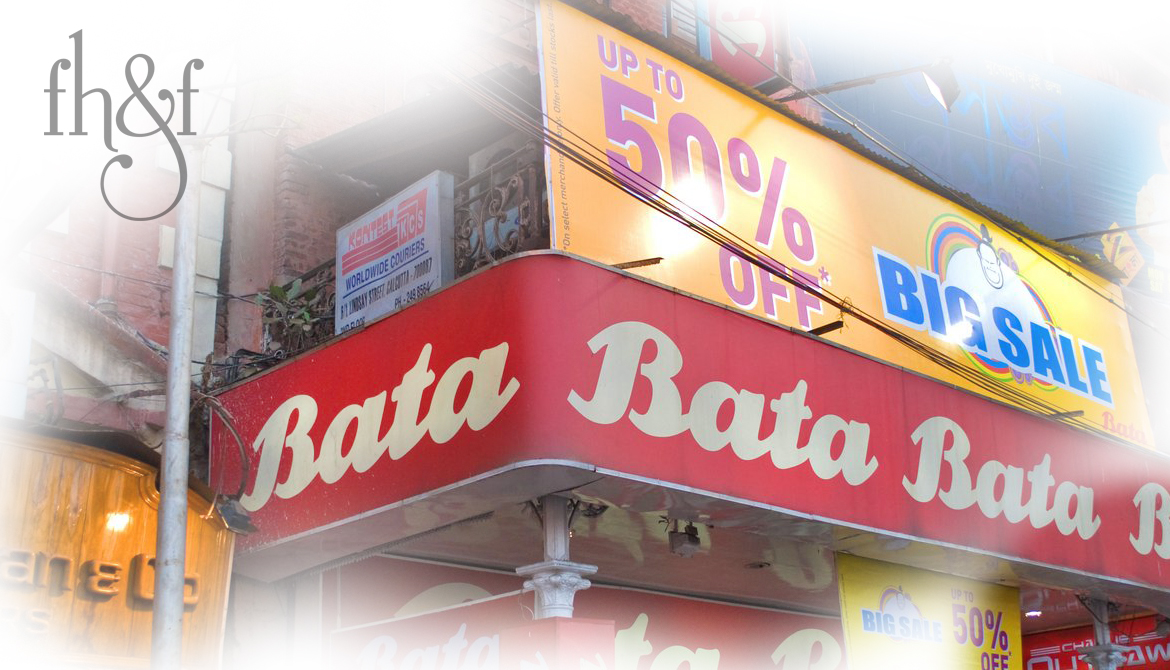 Faticharan and Shoes of Faith

As we made our way toward the Shri Ganesh temple, I carefully dodged every puddle, but my brother charged ahead. Standing in front of a large puddle, he waved to summon my attention, then jumped in to create what must have been the biggest splash of that year’s monsoon season.

Emerging from the puddle, my brother tried to step on my shoes with his muddy flipflops. I quickly moved aside, all the while complaining to my mother about how he was trying to ruin my new Bata shoes. As I did, my mind wandered back to what had happened at school several weeks earlier.

Our social studies teacher gathered us in a circle, seated in a lotus pose on the floor, to demonstrate how traditional townhalls used to be held in rural India. As I sat down in the lotus pose, the kid next to me saw the hole in bottom of my shoe and poked his pencil right through it.

I let out a tiny yelp, which sounded hilarious to the rest of the class. The kid who had poked me was the rich, popular kid, and it did not take long for the rest of the class to get creative and bestow on me the nickname of “Faticharan,” which translates loosely to “torn shoe” or “torn feet” in English.

Rising from the bottom of the societal pyramid in a fifth-grade class in India was not easy. I could see only two options: either prove that I could afford better shoes or find a stickier nickname for another kid to draw attention away from me. I decided to keep both options open.

One evening, a family we knew visited us. We had heard they were going through some tough times financially, so we were surprised when they presented us kids with fancy gifts. The father in this family explained that they had decided to pray to Shri Ganesha for six months, and his faith paid off when he both landed a new job and won a lingering court case that eliminated their debt.

Listening to this story, I knew this was my breakthrough. The next morning, I got up earlier than usual and surprised my parents by reciting a prayer in front of the Shri Ganesha idol in the kitchen. As I prayed, I closed my eyes and made a silent wish.

After a few days, my parents’ curiosity got the better of them and they enquired about my newfound enthusiasm for religion. I told them I was praying for new Bata shoes.

“Didn’t we just buy you shoes for the school year?” my father asked.

I told him they had holes in them.

Dad decided we should go to the cobbler and, much to my chagrin, the next evening we got my shoes fixed. The following morning, though, I continued my prayers.

My father could not understand my insistence on getting not just new shoes, but the most expensive brand at the time: Bata.

I wasn’t going to reveal the true reason—that classroom codes had to be abided by. I just kept up the prayer routine for the next few weeks. I thought all this prayer was paying off when my parents asked me what I wanted for my birthday. I replied in the next breath, “Bata shoes!”

My working-class parents subscribed to the philosophy of never buying expensive shoes for kids because their feet grow so rapidly—it wasn’t worth the money. While I had to agree with the logic, I stayed strong in my position. I prayed daily, only now I ended the prayer with a conspicuously audible wish that Shri Ganesha grant me new Bata shoes.

On the evening of my birthday celebration, a few people gathered at our home. I eagerly awaited Dad’s return from work so we could cut the cake. When he appeared at the door, I noticed him carrying what looked like a Bata shoebox. Excitedly, I hugged him and implored him to open the lid.

“Let’s keep it in front of Shri Ganesha while we cut the cake,” my father told me.

In keeping with the traditions of an Indian birthday celebration, the cake cutting was followed by the elderly women in my family giving me their blessings and wishes for long life and success. As soon as the last one was done, I rushed to my mom and begged her to open the box.

The only time shoes were allowed inside the house was when they were new and unworn. When I lifted the lid, I could smell that “new shoe” aroma. I unwrapped the crisp paper, and there they were: a gorgeous pair of black shoes with the Bata logo. They fit perfectly.I could see the joy in my parents’ eyes as I hugged them. My mom reminded me that this was a result of my prayers, and I should visit the Shri Ganesha temple to thank him for granting the wish.

Over the next weeks, as I wore my new Batas to school, I built a sizable group of new followers. “Faticharan” was on the verge of dying.

On one weekend morning, after the rain subsided, my mother suggested that we stop at the Shri Ganesh temple, which was on our way back from produce market. As we approached the temple entrance, I noticed the crowd and, mingling among them, were beggars pleading for alms. I noticed the feet of a homeless boy, roughly my age. He had open wounds that he coated with turmeric (known for its antiseptic properties) and wrapped in newspaper. We briefly locked eyes as I removed my shoes, setting them to the side among the rest that were piled outside the temple.

I could hear the bell ringing and prayers being chanted. Barefoot, I stepped onto the cool marble floor.

As we prayed, I sincerely thanked Shri Ganesha for granting my wish. I enjoyed the Prashad, the traditional holy sweets handed out by the priest.

Feeling calm and content, savoring what was hard to replicate outside the sanctity of this place, I stepped out of the temple door.

My Batas were gone.

Years later, as I left India to study and eventually emigrated to U.S., I forgot about the Batas. Instead, Nike and Adidas would remain my preferred brands of footwear. But that wasn’t the only change. The very thought of removing shoes and leaving them unattended created an uncomfortable feeling for me. It was one of the reasons why I stopped going to Hindu temples in the U.S., because I would have to leave my shoes outside. Most of my arguments with my spouse were about my insistence on wearing footwear inside our home.

As the years went by and I had children, I insisted they wear Converse or Nikes or Vans, while they were perfectly content to walk around barefoot, especially to enjoy the sand between their toes on the beaches of Southern California. When I showed up to the beach in my Under Armour sportswear, my kids made fun of me, but I was OK with it.

Then I went back to India for a work assignment. Social media made it easy to reconnect with former classmates, and so, on my last day in India during that trip, I decided to attend a reunion with my grade school buddies. Alcohol helped dissolve the rust in our memories. I heard the name “Faticharan” after a hiatus of almost 30 years.

That’s when I remembered my Batas. From what I heard that evening, the Western brands were starting to dominate the Indian market, but Batas were being rediscovered by Millennials.

I managed to find a pair of Bata beach flipflops in the airport store, the only item in my large shoe size. For the first time in thirty years, I was once again the proud owner of Bata footwear.

When I got home, my kids suggested a trip to the beach would not only cure my jetlag but also give me an opportunity to wear my new Batas. As my kids rushed to the water and soon were in the waves, I followed along the shoreline. The soft sand made it harder to keep pace. When I noticed someone else had taken off his flipflops and carried them in his hand, I wondered if I should do the same.

I had a plastic grocery bag in the pocket of my shorts. This was the perfect setup. I put flipflops in the plastic bag and tied the bag handles around my belt loops. That way the flipflops stayed with me, while my hands could be free as I walked in the waves with the kids.

Somewhere along that 3-mile stretch of sandy beach, I failed to notice the knot coming lose and the plastic bag containing my Batas dropping off. Only when we decided to turn around did I notice.

When my kids asked me what was wrong, I told them briefly.

“We could just look for a white plastic bag,” my oldest told me.

“They’re just Indian flipflops—they’ll be there,” the younger one added. “It’s not like they’re Nikes or Converse.”

Instantly, I returned to that day at the Shri Ganesha temple—my shock and anger, the wet pavement on my bare feet as we walked home, my dad’s temper flaring at the loss of those costly shoes, and me vowing never to visit another temple. Then, something else: a conversation I’d had back in India during my grade school reunion.

“If praying to Shri Ganesha got you the shoes, why didn’t you pray again for help finding the missing shoes?” a former classmate asked me.

Had I given up too quickly? Had I taken the easy way out? Why had I not thought about praying?

Right there, at the beach, I knelt and drew Shri Ganesha’s elephant head in the sand. Looking toward the setting sun, I folded my hands and prayed silently as my kids watched and shook their heads. I got to my feet with a smile on my face and headed back toward the car.

As we walked the entire length of the beach, I gave up hope of ever finding my flipflops. But on our way to the parking lot, as we passed under a bridge, I saw a white plastic bag carefully placed under the “beach rules” sign. A note was alongside it:

“Looks like your feet enjoyed the sand. Hope to catch them before they feel the sharp hot pavement of the parking lot.”

I still visit the beach every weekend, with one change to my routine—which is why I have a request for you. If you should find a plastic bag under the bridge on the way to the parking lot, please leave it there. Inside are my flipflops waiting for my return from a nice barefoot walk on the sandy beach. Each time, I have faith they will still be there, waiting for me.

Faticharan and the Shoes of Faith, submitted by J.A. Ghanekar