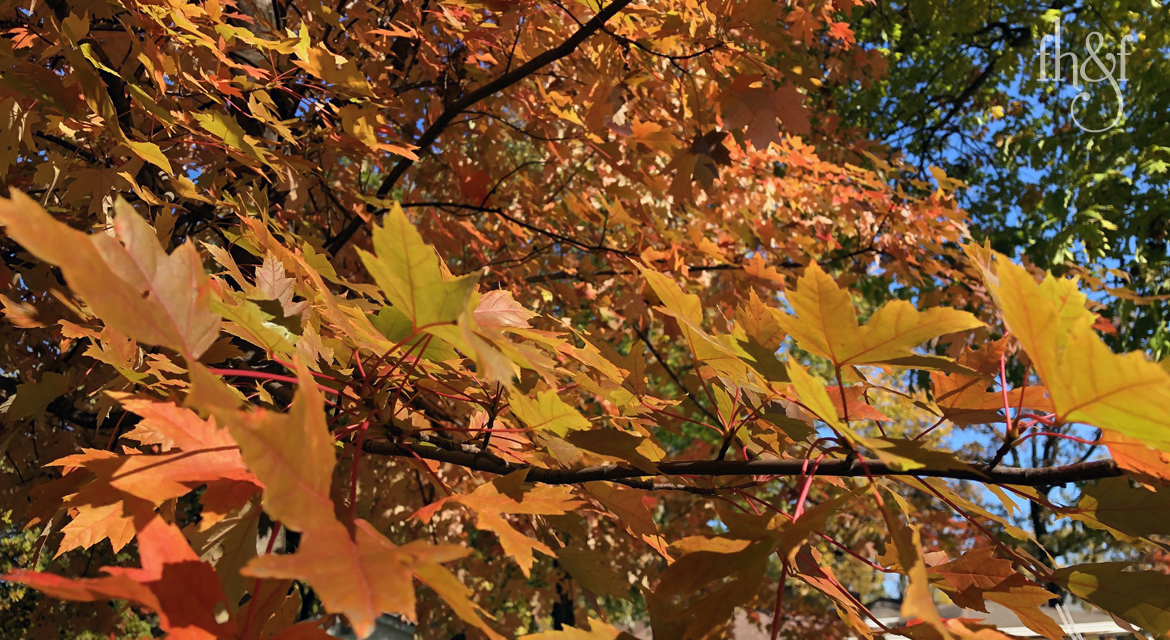 T
he combination of frost and fire kindle a spark, more imagined than visceral, and yet I feel it deeply. This morning, temperatures barely above freezing deposit a white cap on the roof of the neighbor’s garage. The crystals glint, miraculous and fresh, and colors blush in the eastern sky. As the sun rises and light intensifies, nature unveils her overnight artwork of yellow and orange on the maple leaves. The sight triggers something rooted within me, as instinctive as the sap now running within that maple.

The pattern is so familiar, an excitement I feel each year in the cooler temperatures, bright blue sky, and golden sunlight. Even the shorter days make me gleeful, a sentiment I keep (mostly) to myself, as my husband, who was born on the first day of summer, would prefer that sunset be fixed at eight o’clock a night. Or later.

I can’t help it. I’ve been this way since I can remember, for reasons that may have to do with my November birth date and memories of my father being home for supper when the produce harvest was over. My suspicion, though, is that it’s deeper than that—some genomic tracing from generations ago, when autumnal days were treasured for the pureness of their brevity. No time to waste. No light to squander. Harvest time.

My “fields” are far more metaphoric than real. Other than some basil, gone leggy and to seed, and parsley still profuse in its pot, I have no crops. My past attempts produced bountiful vines, but few tomatoes—and those that did grow and reddened were enjoyed by the chipmunks, not me. Ditto the strawberries, gone rogue in the garden. Instead, I grow flowers, still blooming, the last colors eked out until a hard frost does them in. Their days are numbered.

My bright harvest measures in pages, not bushels. A summer of diligent rewrite has netted 304 pages, off to the agent, off to the marketplace with fingers crossed. A short story birthed in spring has brought home a literary prize nomination. Encouraging, yes, but much work remains. Acceptance or rejection, there will always be more to do; images to conceive and capture, stories to shape and form, characters to be coaxed from the shadows of my brain to take residence on the page.

All this work is best done as the Earth tilts its northern hemisphere where I live toward winter. Of course, I wrote all spring and summer, as is my habit and my profession. But there is something deeply satisfying about the dark mornings and gloomy late afternoons that send me to my desk, my sanctuary.

My pulse quickens as my fingers fly, and words appear in the first draft, disappear in the second, and reappear in the third. It’s a bright harvest of ideas, a bounty to savor and explore.

Patricia Crisafulli, M.F.A., is an award-winning writer, published author, and founder of FaithHopeandFiction.com. She received her Master’s in Fine Arts (MFA) from Northwestern University, which also honored her with the Distinguished Thesis Award in Creative Writing. She is the recipient of three Write Well Awards for best-of-the-web literary fiction for stories that have appeared on FaithHopeandFiction. She is the author of several nonfiction books and a collection of short stories and essays, Inspired Every Day, published by Hallmark.